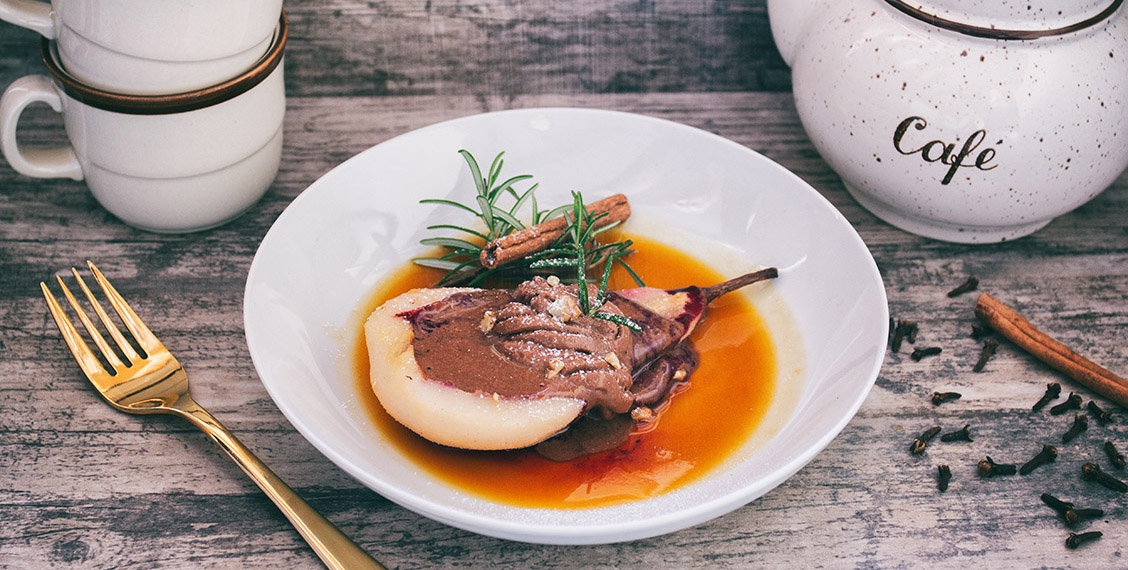 Of course cute with sexy curves.
Everyone knows them and almost everyone loves them. The local fruit classic Pear made it this year on our Christmas plate.

Especially the small things make our lives richer and happier. Anyone who has ever been surprised with a lovingly handcrafted or carefully selected gift knows what it means. It brings a special joy as it expresses esteem, respect and love. Such a small thing is also my poached roasting pear, which I prepared with much love on the 24th for Mr. C. Of course it can be special for the party, that's why I created this wonderful winter recipe, which is prepared and enjoyed the same way every other winter day. And best of all, this recipe inspired me and I made a chocolate soup out of it.

Put the raisins overnight in the rum.
Wash pears, peel and halve. Remove the core housing with a small spoon or with a ball cutter.
Pear juice, honey liqueur, sprinkles of custard, the cinnamon stick, 3 cloves, the honey and juice simmer the squeezed lemon and poach the pears in the brew.
First from one side, then turn around.
Preheat oven to 180 ° C top and bottom heat.

Inin between you can mash or puree the blueberries with a dash of rum and a small dash of cinnamon syrup.
I used frozen blueberries. This I have previously thawed a little.
Bring the pears from the broth, drain and place in an ovenproof mold.
Drizzle with cinnamon syrup. Sprinkle the resulting hole from the pitted interior of the pear with ground hazelnuts.
Put in a few rum raisins and now comes the blueberry, rum and cinnamon syrup mixture.
Put everything on the middle rail in the oven and fry it for about 15-20 minutes.

In the meantime, the gelatin in cold water for about 2 minutes. soak, then gently express.
Whip the cream.
Melt the chocolate over a water bath, mix in the gelatine, allow to cool slightly and stir with the egg. (it must not be too hot so that the egg does not stall)
Add the whipped cream to the chocolate mixture and keep it cool for approx. 30 minutes.
Meanwhile you can prepare the caramel sauce. Heat the raw sugar in a small saucepan until light caramel is produced.
Carefully deglaze with about 60 ml of water, add a sprig of rosemary and cook until the caramel has dissolved.
Remove the sprig of rosemary. Stir in the butter with a whisk. 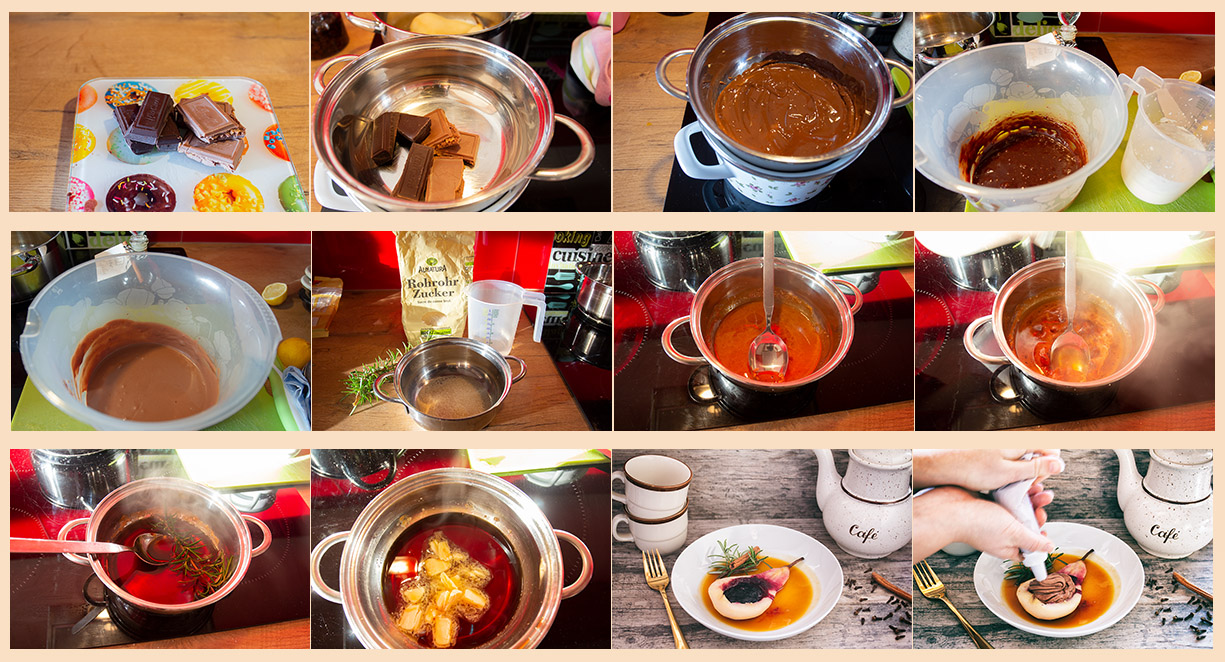 Get the pears out of the oven.
Spread the sauce on the plate.
Put the pear on it.
Put the chocolate sauce in a syringe bag and sprinkle on the pears with the blueberries.
Decorate nicely with sprigs of rosemary, cinnamon sticks, fried chopped walnuts and powdered sugar. 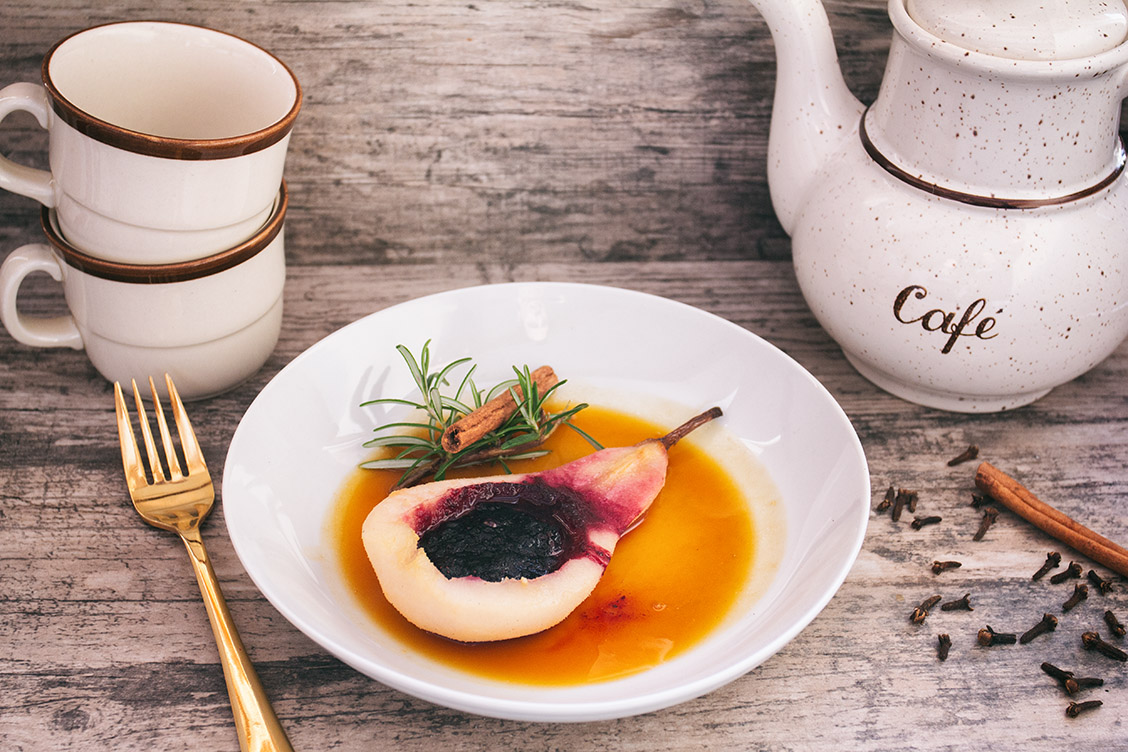 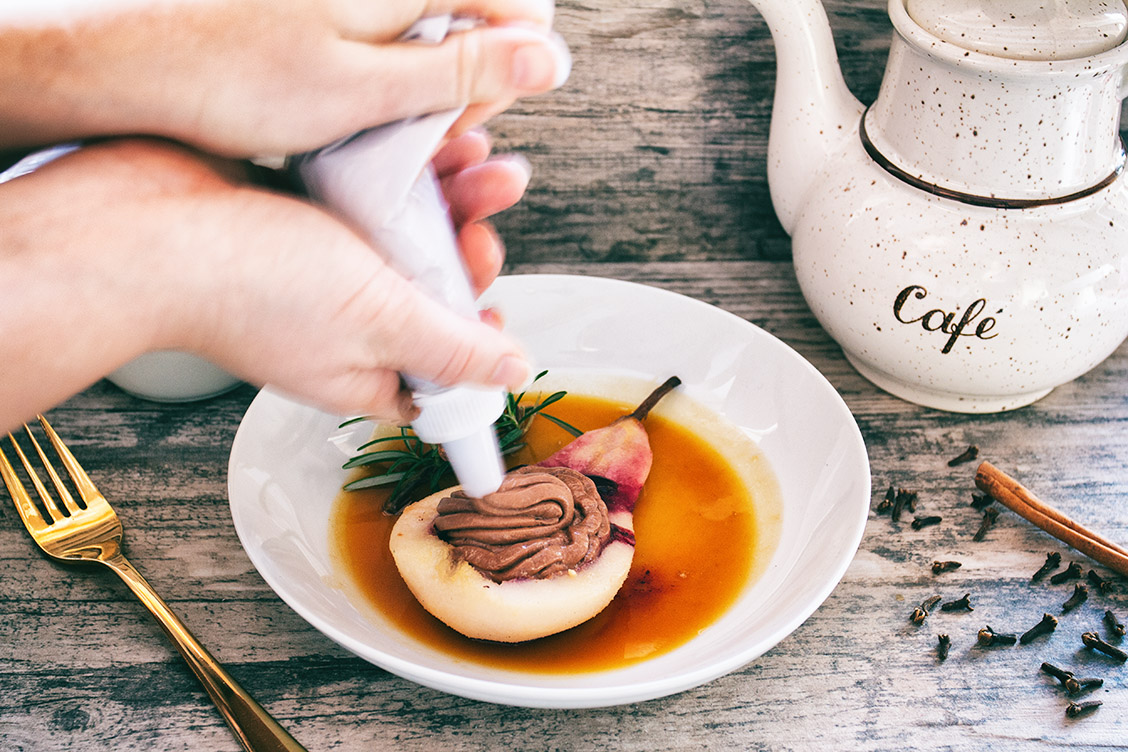 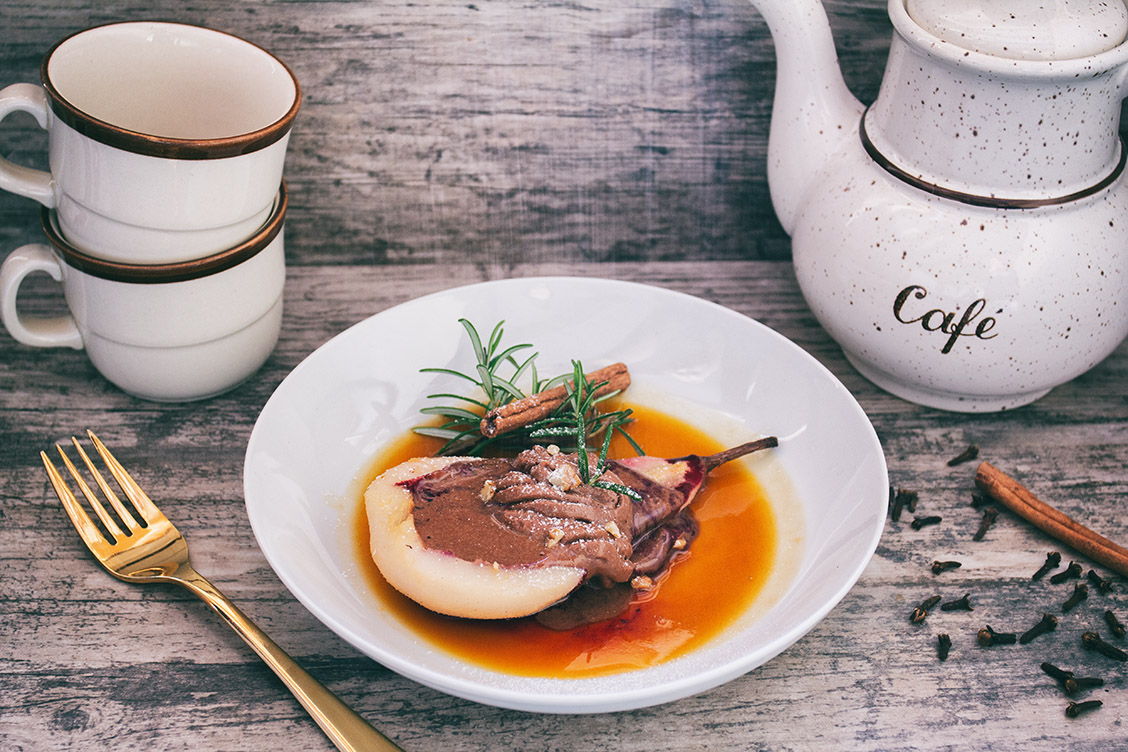